At some point, when you try to pander to smaller and smaller groups in order to boost sales, your company becomes a parody of itself. Marvel has done just that. 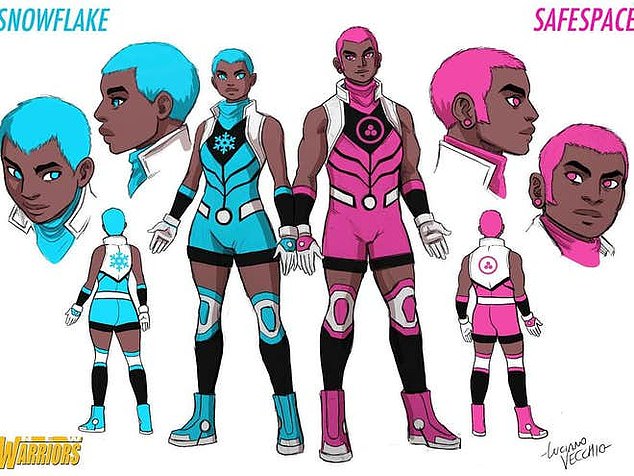 The “New” New Warriors comic is an eye rolling, agenda driven, pamphlet of propaganda. Already people on both sides are complaining, but for different reasons. Those whom are tired of being attacked as everything evil point to these two characters and say, this is why we stopped buying comics. The continued shaming, blaming, and destroying of iconic characters due to some social justice agenda has turned off major comic fans – white males. The “progressive” crowd is complaining that the characters feel like an insult. An attempt to attack or make fun of “progressive” views. Unfortunately this unintended parody is the whole reason why people of all walks of life have stopped buying comics. It is also why groups comic book companies are trying to court won’t buy comics. In an attempt to be “diverse” comic companies create characters that are cliched and pander, rather than create characters whom are original and engrossing.

Sadly a hobby I had enjoyed for nearly four decades is coming to a close. Comic companies were able to continually reinvent themselves in creative ways, update characters in ways to make those characters not only more appealing to new people, but satisfy older fans. The creativity is gone.

The whole method of producing comics and distributing them is also bloated and antiquated, thus would eventually collapse under its own weight. The take over of comics by the current regime of agenda driven nitwits was the introduction of sand into the gears of a machine that was breaking down.

Why would I buy a pamphlet that is designed to propagandize hate and bigotry against me disguised as “progress” or “inclusive”? Why would I buy something that insults me?

The central concept of heroes was altruism. The heroes fought for the good of all people, not for some misguided ideals or values. Superman fought for truth, justice, and the American way. Unfortunately the American way has become distorted and viewed as wrong. If you look at the actual origins of Superman, and the origin of Superman’s creators, things become very clear. Jerry Siegel and Joe Shuster were children of immigrants whom sought and achieved a better life in America. Spider-Man fought crime because he did not want others to suffer tragedy he suffered as Peter Parker. Uncle Ben was killed because Spider Man refused to stop a thief. With great power, comes great responsibility.

Creators of comics tend to be influenced by their own world view. Creators put themselves into their creation. Villains reflect the creators perception of evil. The hero fights against that evil. Superman’s greatest villain was Lex Luthor. The origins of Lex Luthor have changed throughout time, but Superman’s goals have not. Lex Luthor was a genius whom used his intelligence to commit criminal acts. Then Luthor became the CEO of a global corporation. A ruthless businessman intent on furthering his own goals. Spider Man’s rogues gallery is filled with villains whom represented the misuse of science for personal gain or misused their powers.

At some point comic book companies in the attempt to prove themselves as being pleasing to all people and inclusive, end up displeasing everyone and alienated those whom were fans.