Several months ago, I wrote a post about how a certain fast food franchise, McDonald’s, had driven me to break a nearly 15 year boycott of their competitor, Burger King. The reason being service or should I say, lack of service.

When I go through a zipper merge drive thru, which is the type the McDonald’s I went to regularly has, it is a very annoying even angering experience. People do not know how to properly merge or are just total jerks. When I make it through the ordering part, and then reach the pay window, I am now wanting to get my food, and go home to relax. Depending on how the food production is going, sometimes the persons in front of me may be parked.

I do not order anything out of the ordinary or customize anything on the menu. Either I order a Big Mac or a Quarter Pounder value meal, with a bottled water. Maybe I will order a chicken sandwich. Not a very mind blowing things to order.

When I get to the window where I pick up my food, and the person asks me to park, it is annoying. It becomes real annoying when two people are parked ahead of me, and there is no where to go. Since I had been parked three times in a row at a certain McDonald’s, one time waiting ten minutes, and having to go into the restaurant to get my food. Since I was now extremely unhappy, I decided to stop going to McDonald’s. Not indefinitely, but at least not as regularly as I went. I usually went to McDonald’s once a week. 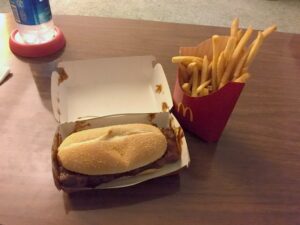 Now the McRib is available for a limited time. Knowing that the likelihood of my being parked was great. I prepared to stand my ground, and refuse to move if I was asked to park. I thought it might be a great YouTube video to record. Then I thought, why invite conflict?

If I was going to wait for my food, I would simply go into the restaurant, order, and wait. Ten minutes later, after putting up with other annoying customers waiting for their food, I received my order. McDonald’s has the ordering kiosks as well. The kiosks suck. Does not really aid in any form of efficiency.

Sadly, the thing that made the McRib special to me, the combination of lots of onions and sauce mixed with the taste of the meat, was stolen from me. There was plenty of sauce, only a sprinkling of onions. The taste was not there. It was poorly constructed, and bland. A special sandwich, that I always look forward to ordering, and until now, not disappointing, became disappointing.

At this point, I will more than likely go back to McDonald’s, but I will order my food in restaurant, rather than drive thru. That is the compromise.